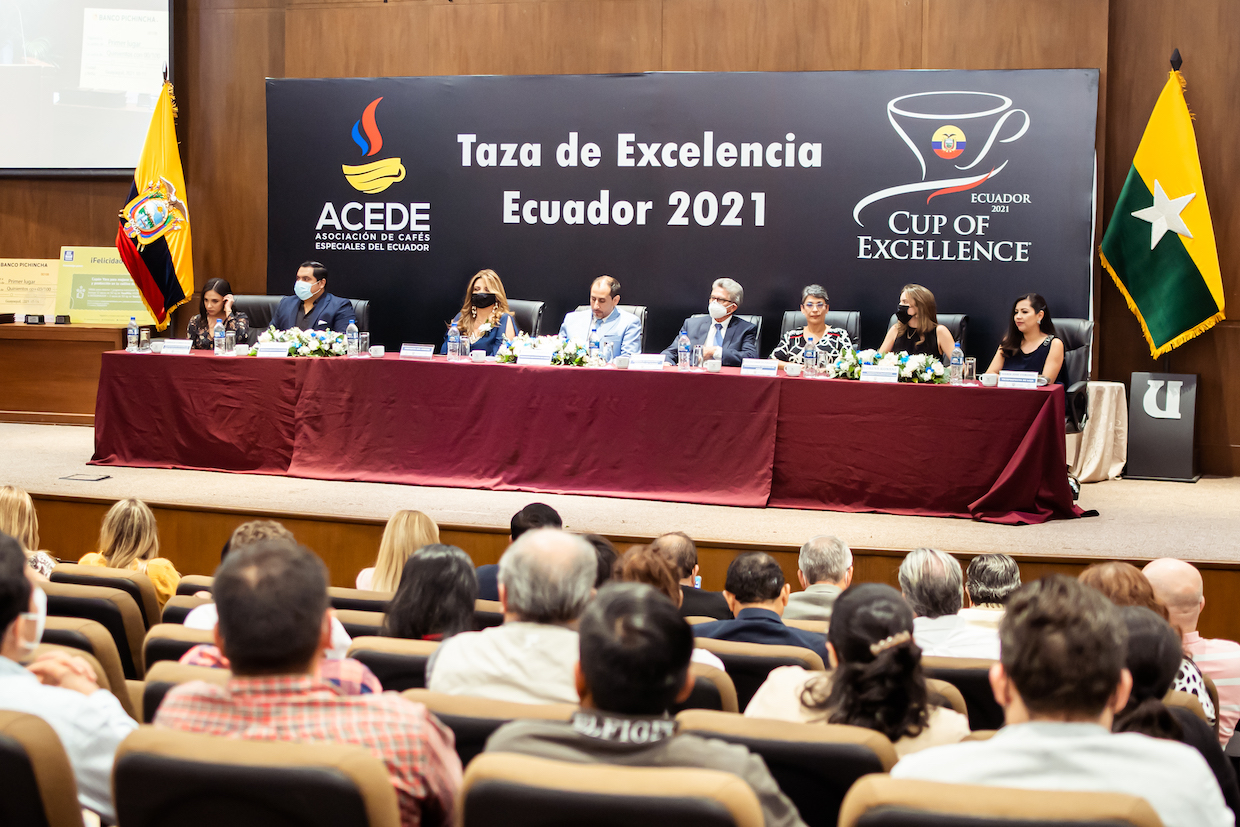 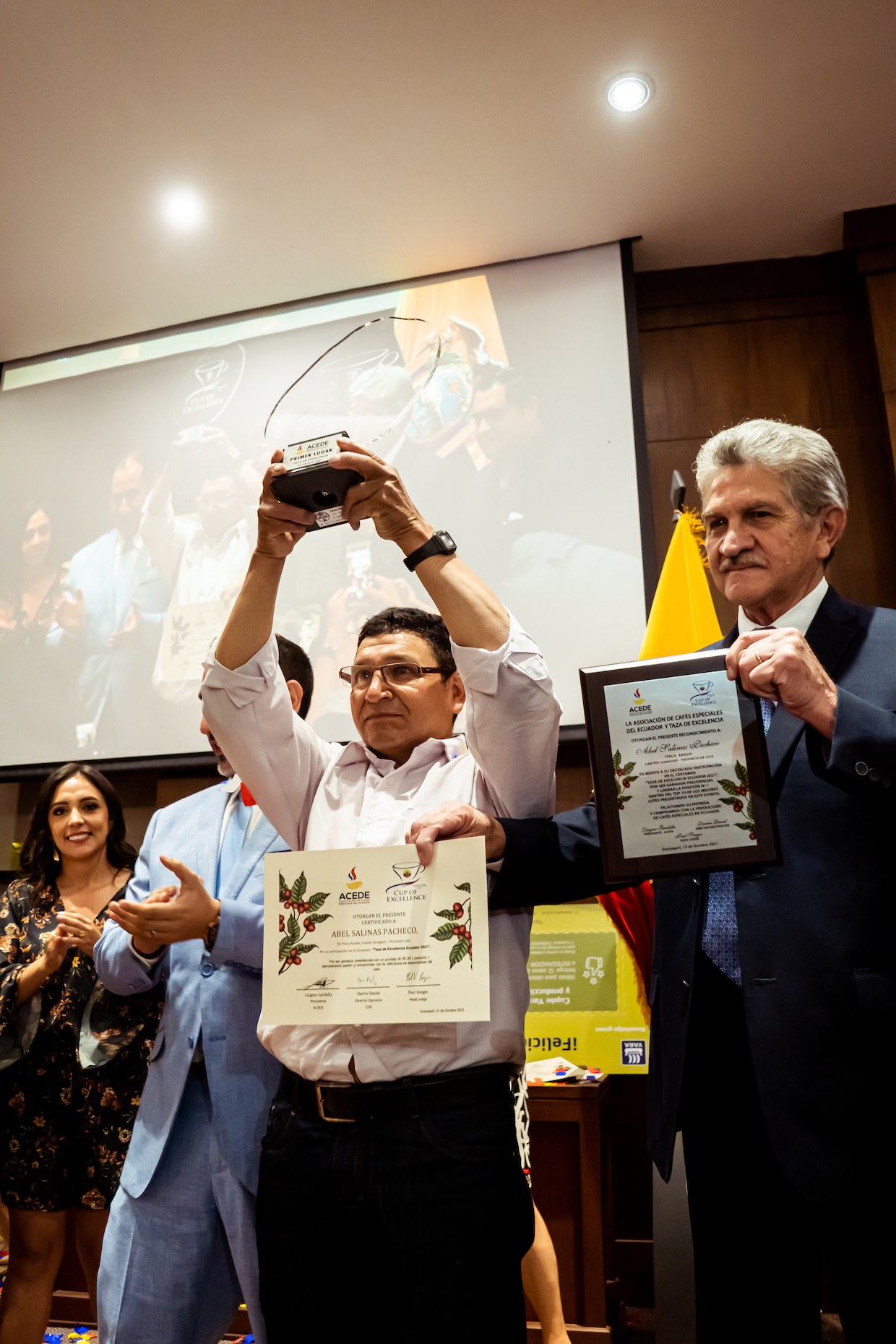 In a historic moment for the Ecuadorian coffee sector, the first ever Ecuador Cup of Excellence arrived this week, celebrating the nearly 30 coffee producers whose winning green coffees are heading to auction in November.

“Finally, Ecuador will start to position itself as one of the most exclusive and sought-after origins in the world,” Wilson González Ramos, Executive Director of the Asociación de Cafes Especiales del Ecuador (ACEDE), said in an announcement following the in-person awards event this week in Guayaquil.

The Ecuador Cup of Excellence presentation earlier this week in Guayaquil.

Ramos described his feelings on the occasion as “happy, realized, optimistic,” as 23 coffees entered into the inaugural competition scored above 87 points to earn COE awards. An additional five coffees scored between 86 and 86.99 to earn COE “National Winners” recognition, based on the competition’s rigorous judging process. All winners will be heading to auction in November, with the COE auction taking place Monday, Nov. 29.

For more than two decades, the Cup of Excellence competition has been partnering with in-country organizations throughout the coffee-growing world for its renowned quality competition and auction program. The program is designed to be inclusive to producers countrywide, while also drawing the attention of premium buyers throughout the world who are seeking unique, traceable, high-quality microlots.

Nestled between coffee giants Colombia to the north and Peru to the south, Ecuador offers ideal growing conditions for high-quality arabica coffee, yet this is the first time COE has taken place in the country, courtesy of the partnership with ACEDE.

“We are now writing a new chapter for the coffee sector in Ecuador,” Ramos stated in an announcement released by COE. “There is a new wave coming in Ecuador — a new coffee wave — a revolution of new plantations, new coffee shops, new baristas, cuppers, roasters, new processes… We have proven that Ecuador can and must aim for excellence. This will be the best motivation for new and young generations to find interest and passion for this beautiful world of coffee.”

All three of the top coffees in the 2021 Ecuador Cup of Excellence competition were grown in southern Ecuador’s high-altitude Loja region.

In first place was a washed-process Typica Mejorado variety from the Arashi farm that scored a remarkable 90.39 points, according to the international jury. The second-highest-scoring coffee was a natural-process Sydra variety from the El Aguacate farm and farmer Pablo Andrés Eguiguren Calisto that scored 90.21. Scoring 90.07, the third-place coffee, another Typica Mejorado, was produced by Curt Jhonn Madisson of Alaska Del Sur. 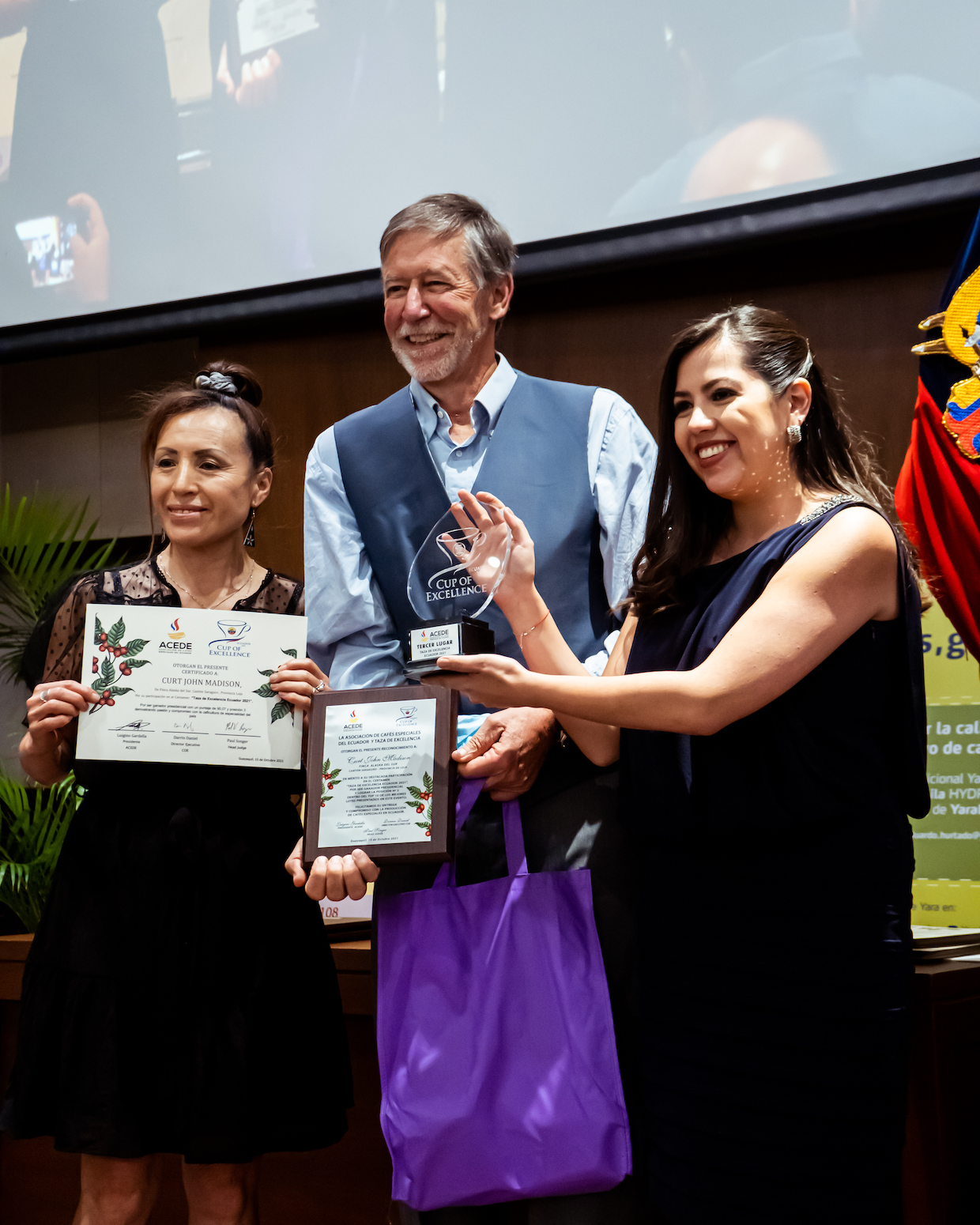 Fourteen of the 23 COE-winning coffees came from Loja, with Typica Mejorado and Sydra being the most heavily represented plant varieties. Just over half of the winning coffees were fully washed-process coffees, while the other winning lots were either natural-process, honey-process, or anaerobic-natural-process.

The complete list of winning farms and producers can be found here, alongside the coffee descriptions. Additional upcoming COE auctions include Peru (Dec. 2), Brazil (Dec. 20) and Indonesia (Jan. 27).